Manic Street Preachers are a Welsh rock band, formed in 1986 in Blackwood, Caerphilly and consisting of James Dean Bradfield (lead vocals, lead guitar), Nicky Wire (bass guitar, lyrics) and Sean Moore (drums, percussion, soundscapes). They are often colloquially known as the Manics. Following the release of their first single, "Suicide Alley", the band was joined by Richey Edwards as co-lyricist and rhythm guitarist. The band's early albums were in a punk vein, eventually broadening to a greater alternative rock sound, whilst retaining a leftist politicisation. Their early combination of androgynous glam imagery and lyrics about "culture, alienation, boredom and despair" has gained them a loyal following and cult status.
With their debut album, Generation Terrorists, the Manic Street Preachers proclaimed it would be the "greatest rock album ever", as well as hoping to sell "sixteen million copies" around the world, after which they would split up. Despite the album's failure to meet this level of success, the band carried on with their career. The group became a trio when Richey Edwards disappeared in February 1995. The band went on to gain critical and commercial success in spite of his absence.
Throughout their career, the Manics have headlined several festivals including Glastonbury, T in the Park, V Festival and Reading, won eleven NME Awards, eight Q Awards and four BRIT Awards. They have been nominated for the Mercury Prize in 1996 and 1999, and have had one nomination for the MTV Europe Music Awards. The group has reached number 1 in the UK charts three times: in 1998, with the album This Is My Truth Tell Me Yours and the single "If You Tolerate This Your Children Will Be Next", and again in 2000 with the single "The Masses Against the Classes". They have sold more than ten million albums worldwide.

Walk Me to the Bridge EP

This Is the Day Single

Postcards From a Young Man Single

Some Kind of Nothingness Single

(It's Not War) Just the End of Love Single

Send Away the Tigers

Your Love Alone Is Not Enough Single

God Save the Manics EP

The Love of Richard Nixon Single

There by the Grace of God Single 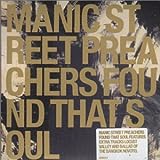 So Why So Sad Single

The Masses Against the Classes Single

You Stole the Sun From My Heart Single

Nobody Loved You Single

This Is My Truth Tell Me Yours

If You Tolerate This Your Children Will Be Next Single

A Design for Life Single

She Is Suffering Single

Roses in the Hospital Single

Gold Against the Soul

From Despair to Where Single

You Love Us Single

Generation Terrorists/Gold Against the Soul

Lipstick Traces: A Secret History Of

Masses Against the Classes

There By the Grace of God 1