If I Had My Way: Early Home Recordings

The Guitar and Banjo of Reverend Gary Davis

Say No to the Devil

Demons and Angels: The Ultimate Collection 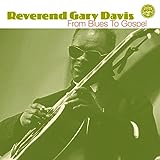 From Blues to Gospel

Slippin' 'til May Gal Comes in Partner