The Fall were an English post-punk band, formed in 1976 in Prestwich, Greater Manchester. They underwent many line up changes, with vocalist and founder Mark E. Smith as the only constant member. The Fall's long term musicians have included drummers Paul Hanley and Karl Burns; guitarists Marc Riley, Craig Scanlon and Brix Smith; and bassist Steve Hanley, whose melodic, circular bass lines are widely credited with shaping the band's sound from the early 1980s to the late-1990s.
First associated with the late 1970s punk movement, the Fall's music underwent numerous stylistic changes, often concurrently with changes in the group's lineup. Nonetheless, their music has generally been characterised by an abrasive, repetitive guitar-driven sound, tense bass and drum rhythms, and Smith's caustic lyrics, described by critic Simon Reynolds as "a kind of Northern English magic realism that mixed industrial grime with the unearthly and uncanny, voiced through a unique, one-note delivery somewhere between amphetamine-spiked rant and alcohol-addled yarn." While the Fall never achieved widespread success beyond minor hit singles in the late 1980s and early 1990s, they have maintained a strong cult following.
The Fall have been called "the most prolific band of the British post-punk movement." From 1979 to 2017, they released thirty-two studio albums, and more than three times that number when live albums and compilations (often released against Smith's wishes) are taken into account. They were long associated with BBC disc jockey John Peel, who championed them from early on in their career and described them as his favourite band, famously explaining, "they are always different; they are always the same." In 2018, Smith died at the age of 60, effectively putting an end to the group.

Night of the Humerons Single

Your Future Our Clutter

Rude (All the Time) EP

(We Wish You) A Protein Christmas Single

The Real New Fall LP (Formerly Country on the Click)

Are You Are Missing Winner

Rude (All the Time) / I Wake Up in the City Single

Why Are People Grudgeful? EP

Behind the Counter E.P. Volume 1 EP 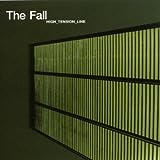 Cab It Up Single

I Am Kurious Oranj

There's a Ghost in My House Single

Couldn't Get Ahead Single

The Wonderful and Frightening World of… The Fall

The Man Whose Head Expanded Single

Grotesque (After the Gramme)

How I Wrote ‘Elastic Man’ Single

Rowche Rumble / In My Area Single

Live at the Witch Trials

It's the New Thing! Single