Diane Joan Schuur (born December 10, 1953), nicknamed "Deedles", is an American jazz singer and pianist. As of 2015, Schuur had released 23 albums, and had extended her jazz repertoire to include essences of Latin, gospel, pop and country music. Her most successful album is Diane Schuur & the Count Basie Orchestra, which remained number one on the Billboard Jazz Charts for 33 weeks. She won Grammy Awards for best female jazz vocal performance in both 1986 and 1987 and has had three other Grammy nominations.
Schuur has performed in venues such as Carnegie Hall, The Kennedy Center, and the White House, and has performed with many artists including Ray Charles, Frank Sinatra, Quincy Jones, and Stevie Wonder. Co-performers on Schuur's albums have included Barry Manilow, José Feliciano, Maynard Ferguson, Stan Getz, Vince Gill, Alison Krause, and B.B. King. Her album with B.B. King was number one on the Billboard Jazz Charts. She has been Johnny Carson's guest on NBC's The Tonight Show eleven times.
Schuur has been blind from birth due to retinopathy of prematurity, but has been gifted with absolute pitch memory and a clear vocal tone. In 1996, she was a guest performer on Sesame Street, where she was interviewed by Elmo and described to him how a blind person can learn to use other senses to adapt in the world. In 2000 she was awarded the Helen Keller Achievement Award by the American Foundation for the Blind. 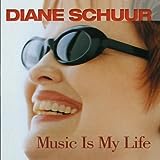 Music Is My Life