Diego Ramón Jiménez Salazar (born Madrid, 27 December 1968), known as El Cigala (Spanish for 'Norway Lobster', a popular crustacean in Spain), is a famous Romani Flamenco gypsy singer. As he himself has said, the nickname was given to him by three guitar players, Los Losada, for being very thin, not by Camarón de la Isla as commonly believed.
Diego El Cigala also holds Dominican citizenship.
One of his great albums is the 2003 "Lágrimas Negras", a collaboration with then 85-year-old Cuban pianist Bebo Valdés. The graceful fusion of Cuban rhythms and flamenco vocals made this record an international success.

Born into a family of Romani artists and intellectuals in Madrid, El Cigala started singing in flamenco peñas (enthusiasts' clubs) and tablaos, until his excellent meter and ability to mark the rhythm caught the attention of world-class bailaores like Mario Maya, Faíco, Farruco, El Güito, Manuela Carrasco, Cristóbal Reyes, Carmen Cortés, Joaquín Cortés and he began touring as part of their companies. By the late nineties, having collaborated on recordings by Camarón, Tomatito, Gerardo Núñez and Vicente Amigo, he was ready to record his own CD. With the success of "Undebel" he launched his career as solo singer. He has now recorded 8 CDs and has won two Grammys and 5 Latin Grammy nominations.
His wife, Amparo Fernández, died in 2015 from cancer in Punta Cana. 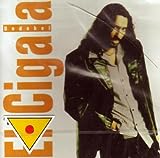 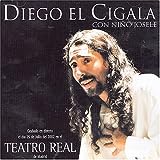