John Birks "Dizzy" Gillespie (; October 21, 1917 – January 6, 1993) was an American jazz trumpeter, bandleader, composer, and singer.
Gillespie was a trumpet virtuoso and improviser, building on the virtuoso style of Roy Eldridge but adding layers of harmonic and rhythmic complexity previously unheard in jazz. His combination of musicianship, showmanship, and wit made him a leading popularizer of the new music called bebop. His beret and horn-rimmed spectacles, his scat singing, his bent horn, pouched cheeks and his light-hearted personality provided some of its most prominent symbols.
In the 1940s Gillespie, with Charlie Parker, became a major figure in the development of bebop and modern jazz. He taught and influenced many other musicians, including trumpeters Miles Davis, Jon Faddis, Fats Navarro, Clifford Brown, Arturo Sandoval, Lee Morgan, Chuck Mangione, and balladeer Johnny Hartman.
AllMusic's Scott Yanow wrote: "Dizzy Gillespie's contributions to jazz were huge. One of the greatest jazz trumpeters of all time, Gillespie was such a complex player that his contemporaries ended up being similar to those of Miles Davis and Fats Navarro instead, and it was not until Jon Faddis' emergence in the 1970s that Dizzy's style was successfully recreated [....] Arguably Gillespie is remembered, by both critics and fans alike, as one of the greatest jazz trumpeters of all time".

Something Old, Something New, Volume 4 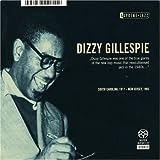 The Winter in Lisbon

Jazz Studies: The Best of the Perception Years

Jazz in Paris: The Giant

Closer To The Source

Dizzy Gillespie And The Mitchell-Ruff Duo

A Jazz Hour With Dizzy Gillespie

To a Finland Station

The Dizzy Gillespie Big 7 At The Montreux Jazz Festival 1975 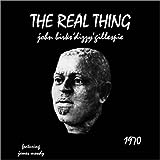 Dizzy on the French Riviera

Have Trumpet, Will Excite!

A Portrait of Duke Ellington 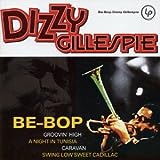 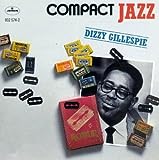 Diz And The Bird

The Best of Dizzy Gillespie 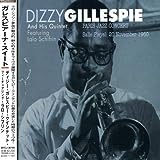