Shawn Antoine Ivy, known as Domino, (born 1972 in St. Louis, Missouri), is an American rapper, Being a Crip himself, he auditioned for the Bloods & Crips project in the early 1990s. He is the first rapper, in order of appearance, in the title track Bangin' on Wax on the album of the same name. His debut album, Domino, spawned two major hits in the United States, including the Top 10 hit "Getto Jam", which reached No. 7 on the Billboard Hot 100. Several further albums were released, and Domino continued to score hits on the R&B charts into the 2000s (decade).
In 1996, Domino appeared on the Red Hot Organization's compilation CD, America is Dying Slowly, alongside Biz Markie, Wu-Tang Clan, and Fat Joe, among many other prominent hip hop artists. The CD, meant to raise awareness of the AIDS epidemic among African American men, was heralded as "a masterpiece" by the Source magazine. He also performed on many soundtracks: Russel Simmons The Show, Jim Carrey's The Mask, Alicia Silverstone's Clueless, Damon Wayans Blankman and Spike Lee's Tales From The Hood, to name a few.
While his self-titled debut album was critically and commercially well-received, many were quick to point out that his style was similar to that of fellow Long Beach resident and up-and-coming Dr. Dre protégé, Snoop Doggy Dogg. He is the first hip-hop artist to perform a No. 1 rap single which contained melodic hip-hop throughout the entire song. Three years later, Domino released his second album, Physical Funk, which failed to become as successful as its predecessor. The video "Physical Funk" was a No. 1 video on MTV and the album was delayed before its release due to Def Jam (Russell Simmons record label) dropping Outburst Records (the record label Domino was released on) before the album was released. 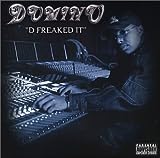 © might belong to the performers or owners of the songs. Lyrics may be used for private study, scholarship or academic research only.
In accordance to the Digital Millenium Copyright Act, publishers may ask to have specific lyrics removed.
This is a non-commercial site. We are not selling anything. Details
Lyricszoo content, design, layout © 2022 Lyricszoo.