Jacob Fred Jazz Odyssey (or JFJO or The Fred) is an American Instrumental Music group started in Tulsa, Oklahoma in 1994. The band has had 16 different members in 20 years and put out 25 albums under the leadership of keyboardist/composer Brian Haas. The current lineup is Haas on piano, Fender Rhodes and synthesizers, Josh Raymer (joined 2007) on drums and Chris Combs (joined 2008) on electric guitar, lap steel, and synthesizer.
JFJO's music is not easily categorized; although it is mostly in the jazz idiom, it draws from hip hop, funk and rock music. Critic Alex Henderson describes the band's music as a "mildly avant-garde blend of jazz, rock and funk [that] draws on a wide variety of influences... Often quirky, eccentric and abstract, JFJO favors an inside/outside approach but is usually more inside than outside.", while critic Scott Yanow describes the group as "fascinating". Their live shows include compositions by John Coltrane, Duke Ellington, Charles Mingus, and Thelonious Monk among others, and include long experimental improvisations that, at times, could be considered atonal. Furthermore, the band's early years as an octet featured a strong hip-hop influence.
The group began with different monikers and members in the early 90s including founding members Haas and Reed Mathis, as well as Sean Layton, Dove McHargue, Matt Leland, & Kyle Wright. In 1994, after repeated viewings of This Is Spinal Tap and increased attendance at their shows, the band members agreed on "Jacob Fred Jazz Odyssey" as the band's new name. "Jazz Odyssey" coming from a scene in the aforementioned Spinal Tap comedy film and "Jacob Fred" being what Haas wanted his unborn brother to be named at age 3.

One Day in Brooklyn EP

The Sameness of Difference 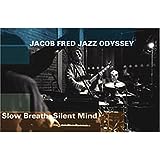