Killer was a rock band founded in 1999 in Helsinki, Finland. Although Killer was a quartet, vocalist Siiri Nordin was by far the most visible member. Notable were the different music styles that influenced their tracks: Siiri grew up with jazz & blues but the influences of the band included grunge pioneers such as Pearl Jam & Nirvana (Timo), electronic music (guitarist Tumppi) and even funk & folk (drummer Teijo, who used to earn a living in a folk-based outfit).
The group's debut single Hurricane was released in February 2001. In August 2001 the debut was followed up by All I Want – a track that topped the local airplay list and made it to No. 2 on the charts, moving the band's debut album 'Sickeningly Pretty And Unpleasantly Vain' up to gold.
Their second album, Sure You Know How To Drive This Thing was internationally released in 2003 and entered the Finnish charts on position 7. Sure You Know How To Drive This Thing includes the song Naughty Boy which became the band's biggest hit. The song was one of the most played songs on Finnish radio during the summer of 2003; it also made it to number one on the MTV's Up North charts. One year later, Killer were invited to play at the legendary Rock am Ring festival in Germany.
On February 5, 2005, bass player Timo Huhtala announced on the band's website the group will take an "undetermined break";

This didn't include any great drama, just normal things. First of all, we went five years in a row without a decent break, so we ran out of ideas and energy. Secondly, we had different kinds of ideas about the direction Killer should be going, musically that is. Since we couldn't agree on this we couldn't continue.

As a result, Timo and Teijo formed their new band Killer Aspect, the name being a combination of the band names Killer and Personal Aspect – the former band of the guitarist. 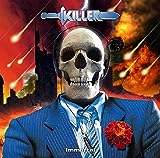