Patsy Cline (born Virginia Patterson Hensley; September 8, 1932 – March 5, 1963) was an American country music singer and part of the Nashville sound during the late 1950s and early 1960s. She successfully "crossed over" to pop music and was one of the most influential, successful, and acclaimed vocalists of the 20th century. She died at age 30 in the crash of a private airplane.
Cline was known for her rich tone, emotionally expressive and bold contralto voice, and her role as a country music pioneer. She helped to pave the way for women as headline performers in the genre, along with Kitty Wells. She overcame poverty, a devastating automobile accident, and significant professional obstacles, and she has been cited as an inspiration by Reba McEntire, LeAnn Rimes, and other singers in diverse styles. Books, movies, documentaries, and stage plays document her life and career.
Her hits began in 1957 with Donn Hecht's and Alan Block's "Walkin' After Midnight," Hank Cochran's and Harlan Howard's "I Fall to Pieces," Hank Cochran's "She's Got You," and Willie Nelson's "Crazy," and ended in 1963 with Don Gibson's "Sweet Dreams." Millions of her records have sold since her death. She won awards and accolades, causing many to view her as an icon at the level of Jim Reeves, Johnny Cash, and Elvis Presley. She became the first female solo artist inducted into the Country Music Hall of Fame in 1973, ten years after her death. In 1999, she was voted number 11 on VH1's special The 100 Greatest Women in Rock and Roll. In 2002, she was voted Number One on Country Music Television's The 40 Greatest Women of Country Music, and she was ranked 46th in the "100 Greatest Singers of All Time" issue of Rolling Stone magazine. Her 1973 Country Music Hall of Fame plaque reads: "Her heritage of timeless recordings is testimony to her artistic capacity."

The Best of Patsy Cline 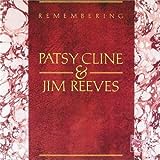 Sweet Dreams (Of You) / Back in Baby's Arms Single

When I Get Through With You / Imagine That Single

Come on In / Let the Teardrops Fall Single

I Love You, Honey Single

A Church, a Courtroom and Then Goodbye Single

The Rockin' Side: Her First Recordings, Volume 3