Priscilla Herdman is an American folk singer, who The New York Times called, "one of the clearest and most compelling voices of contemporary folk music." Although she has written songs, she is notable chiefly for her interpretations of other artists' work.
Born in Eastchester, New York in 1948, she attended the University of Iowa, finishing her studies at the Fashion Institute of Technology in New York. While working in the fashion industry, she began to play in the coffeehouses of Greenwich Village and the church basements of the Upper West Side, and toured in Europe. In 1976, she moved to Philadelphia and decided to become a professional singer.
Her first album, The Water Lily, was released in 1977, on the Philo label. In 1980, her second album, Forgotten Dreams, consisting mainly of covers of songs by contemporary North American songwriters, was released on the Flying Fish label. In 1982, Herdman left Philadelphia and moved to the small rural community of Pine Plains, New York, where she met her husband, Dick Hermans. In 1983 she then released her third album, Seasons of Change. To date, Herdman has released 12 albums, including several in a trio with Anne Hills and Cindy Mangsen.

At The Turning of the Year 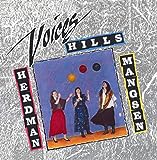