Samuel Cook (January 22, 1931 – December 11, 1964), known professionally as Sam Cooke, was an American singer, songwriter, and entrepreneur.
Influential as both a singer and composer, he is commonly known as the King of Soul for his distinctive vocals and importance within popular music. He began singing as a child and joined The Soul Stirrers before moving to a solo career where he scored a string of hit songs like "You Send Me", "A Change is Gonna Come", "Wonderful World", "Chain Gang", and "Twistin' the Night Away".
His pioneering contributions to soul music contributed to the rise of Aretha Franklin, Bobby Womack, Al Green, Curtis Mayfield, Stevie Wonder, Marvin Gaye, and Billy Preston, and popularized the likes of Otis Redding and James Brown. AllMusic biographer Bruce Eder wrote that Cooke was "the inventor of soul music", and possessed "an incredible natural singing voice and a smooth, effortless delivery that has never been surpassed".
On December 11, 1964, at the age of 33, Cooke was shot and killed by Bertha Franklin, the manager of the Hacienda Motel in Los Angeles, California. After an inquest, the courts ruled Cooke's death to be a justifiable homicide. Since that time, the circumstances of his death have been called into question by Cooke's family.

The Rhythm and the Blues

The Legend of Sam Cooke

That's Heaven to Me / Lord, Remember Me Single

Just Another Day / Christ Is All Single

When a Boy Falls in Love / The Piper Single

Cousin of Mine / That's Where It's At Single

Another Saturday Night / Love Will Find a Way Single

Nothing Can Change This Love / Somebody Have Mercy Single

Twistin’ the Night Away

Bring It On Home to Me / Having a Party Single

Twistin' The Night Away / One More Time Single

Just for You Single

My Kind of Blues

The Wonderful World of Sam Cooke

Tribute to the Lady

Sinner, Run to Jesus / Were You There? Single

I'll Come Running Back to You / Forever Single

You Send Me / Summertime, Part 1 Single

In a Few More Days / Pilgrim of Sorrow Single

Touch the Hem of His Garment / Jesus, Wash Away My Troubles Single

Nearer to Thee / Be With Me Jesus Single

He'll Welcome Me / End of My Journey Single

How Far Am I From Canaan? / It Won't Be Very Long Single

Come, Let Us Go Back to God / Joy, Joy to My Soul Single

Peace in the Valley / Jesus Gave Me Water Single 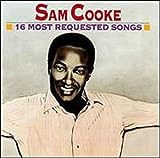 Complete Recordings of Sam Cooke with the Soul Stirrers

Heaven Is My Home

Sam Cooke at the Copa

Sam Cooke with The Soul Stirrers

The Best of Sam Cooke

The Man and His Music

The Man Who Invented Soul

The One and Only

The Two Sides of Sam Cooke

The Wonderful World Of