Sarah Brightman (born 14 August 1960) is an English classical crossover soprano, actress, musician, songwriter, conductor, and dancer.
Brightman has sung in many languages including English, Spanish, French, Latin, German, Turkish, Italian, Russian, Mandarin Chinese, Japanese and Catalan.
Brightman began her career as a member of the dance troupe Hot Gossip and released several disco singles as a solo performer. In 1981, she made her West End musical theatre debut in Cats and met composer Andrew Lloyd Webber, whom she later married. She went on to star in several West End and Broadway musicals, including The Phantom of the Opera, where she originated the role of Christine Daaé.
Her original London Cast Album of the musical was released in CD format in 1987 and sold 40 million copies worldwide, making it the biggest-selling cast album of all time.
After retiring from the stage and divorcing Lloyd Webber, Brightman resumed her music career with former Enigma producer Frank Peterson, this time as a classical crossover artist. She is often credited as the creator of this genre and remains among the most prominent performers, with worldwide sales of more than 30 million records and 2 million DVDs, establishing herself as the world's best-selling soprano of all time.
Brightman's 1996 duet with the Italian tenor Andrea Bocelli, "Time to Say Goodbye", topped charts all over Europe and became the highest and fastest selling single of all time in Germany, where it stayed at the top of the charts for 14 consecutive weeks and sold over 3 million copies. It subsequently became an international success selling 12 million copies worldwide, making it one of the best-selling singles of all time. She has now collected over 180 gold and platinum record awards in 38 different countries. In 2010 she was named by Billboard the 5th most influential and best-selling classical artist of the 2000s decade in the US and according to Nielsen SoundScan, she has sold 6.5 million albums in the country.
Brightman is the first artist to have been invited twice to perform the theme song at the Olympic Games, first at the 1992 Barcelona Olympic Games where she sang "Amigos Para Siempre" with the Spanish tenor José Carreras with an estimated global audience of a billion people, and 16 years later in 2008 in Beijing, this time with Chinese singer Liu Huan, performing the song "You and Me" to an estimated 4 billion people worldwide.
In 2012, Brightman was appointed as the UNESCO Artist for Peace for the period 2012–2014, for her "commitment to humanitarian and charitable causes, her contribution, throughout her artistic career, to the promotion of cultural dialogue and the exchanges among cultures, and her dedication to the ideals and aims of the Organization". Also, since 2010, Brightman is Panasonic's global brand ambassador.
Apart from music, Brightman began a film career, making her debut in Repo! The Genetic Opera (2008), a rock opera-musical film directed by Darren Lynn Bousman, and in autumn 2011 and early 2012 Stephen Evans' "First Night", starring opposite Richard E. Grant. Brightman is the world's richest female classical performer with a fortune of £36 million. In 2014, she began training for a journey to the International Space Station set for 2015. In May 2015, she postponed the flight until further notice, citing personal reasons. Brightman was awarded the decoration 'Cavaliere' in the Order of Merit of the Italian Republic on 2 June 2016.

I Will Be With You Single

Classics: The Best of Sarah Brightman

It's a Beautiful Day Single

A Whiter Shade of Pale / A Question of Honour Single

A Whiter Shade of Pale Single

The Trees They Grow So High

There for Me Single

Who Wants to Live Forever Single

Just Show Me How to Love You Single

A Question of Honour Single

As I Came of Age

Anything but Lonely Single

The Songs That Got Away

The Theme From 'A Room With a View' (Doretta's Dream) Single

All I Ask of You Single

Rhythm of the Rain Single

My Boyfriend's Back Single

The Adventures of the Love Crusader Single

I Lost My Heart to a Starship Trooper Single 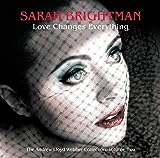