Slade are an English rock band from Wolverhampton. They rose to prominence during the glam rock era in the early 1970s, achieving 17 consecutive top 20 hits and six number ones on the UK Singles Chart. The British Hit Singles & Albums names them as the most successful British group of the 1970s based on sales of singles. They were the first act to have three singles enter the charts at number one; all six of the band's chart-toppers were penned by Noddy Holder and Jim Lea. As of 2006, total UK sales stand at 6,520,171, and their best-selling single, "Merry Xmas Everybody", has sold in excess of one million copies. According to the 1999 BBC documentary It's Slade, the band have sold over 50 million records worldwide.
Following an unsuccessful move to the United States in 1975, Slade's popularity waned but was unexpectedly revived in 1980 when they were last-minute replacements for Ozzy Osbourne at the Reading Rock Festival. The band later acknowledged this to have been one of the highlights of their career. The original line-up split in 1992, but the band re-formed later in the year as Slade II. The band have continued, with a number of line-up changes, to the present day. They have shortened the group name back to Slade.
A number of diverse artists have cited Slade as an influence, including alternative rock icons Nirvana and the Smashing Pumpkins, punk pioneers Ramones, Sex Pistols, The Undertones, The Runaways and The Clash, glam metal bands Kiss, Mötley Crüe, Poison, Def Leppard, heavy metal bands Twisted Sister and Quiet Riot and pop-rock stalwarts The Replacements, Cheap Trick and Oasis.
The Illustrated Encyclopaedia of Music tells of Holder's powerful vocals, guitarist Dave Hill's equally arresting dress sense and the deliberate misspelling of their song titles (such as "Cum On Feel the Noize" and "Mama Weer All Crazee Now") for which they became well known.

Keep Your Hands Off My Power Supply

My Oh My Single

Till Deaf Do Us Part

We'll Bring the House Down

Burning in the Heat of Love Single

Whatever Happened to Slade

Thanks for the Memory (Wham Bam Thank You Mam) Single 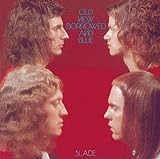 Skweeze Me, Pleeze Me Single

Coz I Luv You Single

Get Down and Get With It Single

We Are All Crazy