Eddie James "Son" House, Jr. (March 21, 1902 – October 19, 1988) was an American delta blues singer and guitarist, noted for his highly emotional style of singing and slide guitar playing.
After years of hostility to secular music, as a preacher and for a few years also as a church pastor, he turned to blues performance at the age of 25. He quickly developed a unique style by applying the rhythmic drive, vocal power and emotional intensity of his preaching to the newly learned idiom. In a short career interrupted by a spell in Parchman Farm penitentiary, he developed to the point that Charley Patton, the foremost blues artist of the Mississippi Delta region, invited him to share engagements and to accompany him to a 1930 recording session for Paramount Records.
Issued at the start of the Great Depression, the records did not sell and did not lead to national recognition. Locally, House remained popular, and in the 1930s, together with Patton's associate Willie Brown, he was the leading musician of Coahoma County. There he was a formative influence on Robert Johnson and Muddy Waters. In 1941 and 1942, House and the members of his band were recorded by Alan Lomax and John W. Work for the Library of Congress and Fisk University. The following year, he left the Delta for Rochester, New York, and gave up music.
In 1964, a group of young record collectors discovered House, whom they knew of from his records issued by Paramount and by the Library of Congress. With their encouragement, he relearned his repertoire and established a career as an entertainer, performing for young, mostly white audiences in coffeehouses, at folk festivals and on concert tours during the American folk music revival, billed as a "folk blues" singer. He recorded several albums, and some informally taped concerts have also been issued as albums. House died in 1988.
In addition to his early influence on Robert Johnson and Muddy Waters, he was an inspiration to John Hammond, Alan Wilson (of Canned Heat), Bonnie Raitt, the White Stripes, Dallas Green and John Mooney.
In 2017, his single, "Preachin' the Blues" was inducted in to the Blues Hall of Fame.

The Delta Blues of Son House 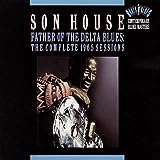 Father of the Delta Blues

King of the Delta Blues 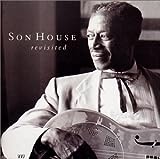 The Legendary 1941/42 Recordings in Chronological Sequence