Woodrow Wilson Guthrie (; July 14, 1912 – October 3, 1967) was an American singer-songwriter, one of the most significant figures in American folk music; his songs, including social justice songs, such as "This Land Is Your Land", have inspired several generations both politically and musically. He wrote hundreds of political, folk, and children's songs, along with ballads and improvised works. His album of songs about the Dust Bowl period, Dust Bowl Ballads, is included on Mojo magazine's 100 Records That Changed The World. Many of his recorded songs are archived in the Library of Congress. Songwriters such as Bob Dylan, Phil Ochs, Johnny Cash, Bruce Springsteen, Robert Hunter, Harry Chapin, John Mellencamp, Pete Seeger, Andy Irvine, Joe Strummer, Billy Bragg, Jerry Garcia, Jay Farrar, Bob Weir, Jeff Tweedy, Bob Childers, Sammy Walker, Tom Paxton, Andrew Jackson Jihad, Brian Fallon, and Sixto Rodríguez have acknowledged Guthrie as a major influence. He frequently performed with the slogan This machine kills fascists displayed on his guitar.
Guthrie was brought up by middle-class parents in Okemah, Oklahoma, until he was 14, when his mother was hospitalized as a consequence of Huntington's disease, a hereditary neurological disorder, and his father had to move to Pampa, Texas, to repay debts from unsuccessful real estate deals. During his early teens Guthrie learned folk and blues songs from his parents' friends. He married at 19, but with the advent of the dust storms that marked the Dust Bowl period, he left his wife and three children to join the thousands of Okies who were migrating to California looking for work. He worked at Los Angeles radio station KFVD, achieving some fame from playing hillbilly music; made friends with Will Geer and John Steinbeck; and wrote a column for the Communist newspaper People's World from May 1939 to January 1940. Throughout his life Guthrie was associated with United States Communist groups, although he was seemingly not a member of any. With the outbreak of World War II and the non-aggression pact the Soviet Union had signed with Germany in 1939, the owners of KFVD radio were not comfortable with Guthrie's Communist sympathies; he left the station, ending up in New York where he wrote and recorded his 1940 album Dust Bowl Ballads, based on his Dust Bowl experiences, and which earned him the nickname the "Dust Bowl Troubadour". In February 1940 he wrote his most famous song, "This Land Is Your Land", as a response to what he felt was an overplaying of Irving Berlin's "God Bless America" on the radio.
Guthrie was married three times and fathered eight children, including musician Arlo Guthrie. Guthrie died from complications of Huntington's disease. During his later years, in spite of his illness, Guthrie served as a figurehead in the folk movement, providing inspiration to a generation of new folk musicians, including mentoring Ramblin' Jack Elliott and Bob Dylan.

This Land Is Your Land 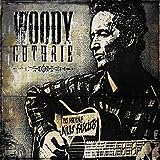 This Land Is Your Land: The Asch Recordings, Vol. 1 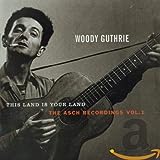 The Asch Recordings, Volume 1: This Land Is Your Land

Songs to Grow on for Mother and Child 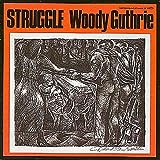